Three exciting breakthroughs have happened over the last two weeks! They involve three of the world’s most powerful central banks: the Bank of England, the US Federal Reserve and the European Central Bank. 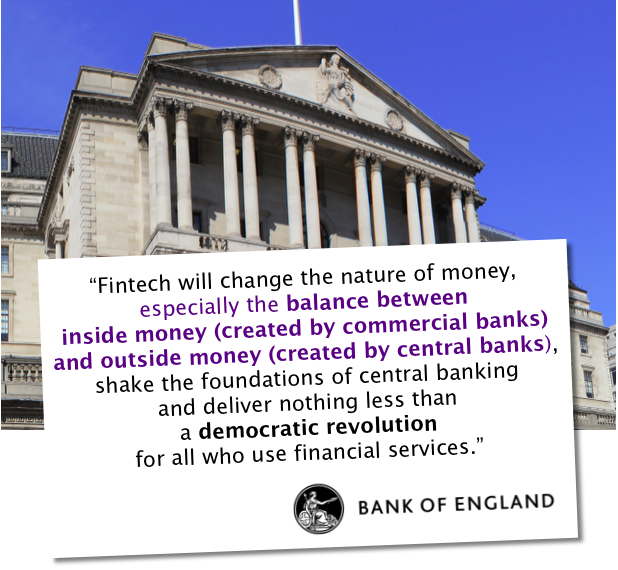 The Bank of England has announced that it will be adopting a policy change that Positive Money has been arguing for over the last 2 years.

The BoE will finally allow non-bank ‘payment service providers’ to hold accounts at the Bank of England, so that they can compete with existing banks to provide current (checking) accounts.

This might sound like a minor technical change, but it could lead to a profound shift in the financial system. It will reduce the power of banks and expose them to competition in payment services. The financial technology (fintech) firms can then show that payments accounts can be provided cost-effectively without the power to create money.

It will be then much easier to campaign for stopping banks from creating money completely.

This is a huge step in the right direction and a big win for Positive Money research team and for the campaign!

Read more about it here. The Chairwoman of the US Federal Reserve, Janet Yellen, said that they ‘might legitimately consider’ using Public Money Creation.

Public Money Creation, using central bank money to directly finance spending in the real economy, has been taboo for over fifty years.

This is a massive step forward for the campaign as credibility for this idea grows among central bankers.

Read more about it here. A group of 18 Members of the European Parliament have signed an open letter to the President of the ECB, Mario Draghi, calling on the ECB to study the viability and implementation of helicopter money (a type of public money creation).

The letter, which was reported in the Financial Times encourages the ECB to carry out a full and in-depth analysis of alternative policies to quantitative easing. Read more about it here.