George Osborne hasn’t quite dodged the bullet yet. With the IMF due to mark the chancellor’s economic homework in the next month or so, Mr. Osborne has managed to have the UK’s economy put in the “third-speed” economic remedial category. According Lagarde the global recovery as taking place at three different speeds. The First-Speed group, countries that are doing well, which comprises of the emerging markets; the Second-Speed group, economies on the mend, a group so exclusive that it consists only of United States, and finally the Third-Speed group, countries that still have some way to go, which is made up of Europe and Japan; and by Europe, she means us.

In response to a question about Britain’s economic outlook, Lagarde said “Over the years what we have done at the IMF is really try to observe as closely as possible what the outcome of the policy was, and we clearly support the policy. And we have said so repeatedly. However, we have also repeatedly said in the last couple of years—and I would not prejudge what we’ll do with the next Article IV—that should growth abate, should growth be particularly low, then there should be consideration to adjusting by way of slowing the pace. This is nothing new.”

Lagarde also urged those in the third group to “press ahead” with banking reform. A policy that has been kicked down the road due to the ponderous time scale over which the coalitions modest reforms will be implemented. the IMF’s  Olivier Blanchard singled out Osborne by warning that if the UK continues with its current economic policy, we could be “playing with fire”. With the reports of net lending to SME’s falling, another ratings agency stripping the UK of its “triple A” rating and the recent figures showing that growth is “particularly low”, it might well be enough bad news to make George Osborne shed yet another tear for the demise something else very close to his heart, his economic credentials.

For the likes of Positive Money, the NEF and the rest of us keen on economic and banking reform of a sustainable and “green” kind, things may be looking up. “What we need is a full-speed global recovery—one that works with growth that is solid, sustainable, and balanced but also inclusive and very much rooted in green development,” said Lagarde, she also spoke of using “unconventional policies” which may be a nod in the direction of alternative money financing. As conventional policies have not produced the growth that many assumed, or hoped it would, and the growing belief that the west’s economic model could be fundamentally flawed, there may be voices inside the IMF talking of economic policies that have been considered taboo for so long, maybe in a moment of bravery some anonymous researcher scribbled the words “Lagarde Luvs Overt Money Finance” or “Lord Turner Fancy’s Helicopter Money” on the toilet wall of the IMF’s Washington headquarters, and when these blasphemous words where then repeated by the likes of Lord Turner, coupled with the failure of conventional policies, maybe the top brass at the IMF have finally thought to themselves that the time has come to speak of the unconventional, full reserve banking might be the next concept to be brought in from the cold. 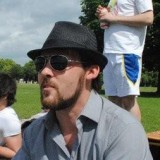 Daniel is a Law student who volunteers at the Positive Money campaign. He has been writing on subjects such as democracy and society since the 2008 crash; he has volunteered for the labour party over the years but now focusses his time on writing about economics, democracy and other social issues as well as campaigning about political and economic reform.